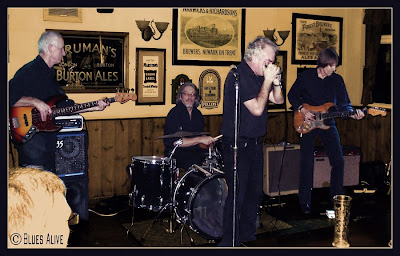 The veteran blues-rocker Simon “Honeyboy” Hickling has been a mainstay of the Midlands blues scene for over thirty years. But what is notable about Honeyboy, as opposed to other veterans of the 60s and 70s scene (such as John O’Leary, for example), is his energy and undying enthusiasm for the music. From the word go, Honeyboy hits the ground running, his trusty harmonica leading the charge. Backed by a line up of seasoned musicians, there’s no holding back this firestorm of a blues player.

The band are regular visitors to the Malt Shovel, usually booked to play at the venue on the lead up to Christmas. And I can understand why! A party animal at heart, Honeyboy likes to join in on the fun himself, and usually indulges in his favourite tipple at The Malt in the process. After all, it’s a relatively short drive back to Leicestershire after the gig, and he’s invariably accompanied by a non-drinking companion for the journey home.

For me, Honeyboy is one act where I can get off my pundits chair and simply let my hair down (metaphorically speaking, of course, as I don’t have so much hair to “let down” any more).

But don't get me wrong. If your thinking that this sounds like a rambunctious cacophony of blues and beer, think again! Honeyboy is a notable blues harp player, and knows his way around his instrument, even when standing on his head (not literally, but you know what I mean). Alternating between his hand-held "bullet" type microphone run through an amplifier and his vocal microphone, Honeyboy played some memorable blues classics, ranging from Little Walter's "Broke And Hungry" to Canned Heat’s “Going Up The Country.” He doesn't pull any punches, and his playing is straight Chicago-style blues, with a sound reminiscient of the great Little Walter. His playing is colourfully interspersed with some fine melodic runs, evoking comparisions to the legendary white bluesman Paul Butterfield.

Bob Wilson (guitar) had a classy eloquent style of playing, with a solid rock tone that contained more than a hint of country. His solos were neatly articulated, without the usual verbiage associated with so many blues guitar players’ performances. His guitar playing was notable for some clever use of the tremolo arm complimenting his fretwork, and the result was a seamless confluence of sound that gave his playing a unique and easily distinguishable signature. You know when you’re listening to a Bob Wilson solo.

The band performed two guitar instrumental numbers, each strategically placed at the middle point of both of the one hour, giving Honeyboy a welcome breather; but more importantly, a chance to replenish his glass at the bar.

The first instrumental was Bob's own take on the Freddie King's "The Stumble" and the second way the definitive Hammond organ classic "Green Onions", both of which were dispatched prefessionally and efficiently without the usual fanfare associated with such perennial masterpeices.

Frank Walker took a bass solo on "The Stumble", and he'll be the first to admit that soloing is not his forte. But his solo provided a mellow placido to Bob's blistering guitar work.

Along with Frank on the bass, Tony Baylis on drums providing a solid back line to the band's effervescent front men. Tony, sporting a fine growth of head hair*, is another member of the band who is perfectly happy to remain in the background, and he put in a proficient and pragmatic performance on drums.

All in all, a rollickingly good evening of high-octane blues.

Incidentally, the posponement of Honeyboy's Yuletide appearance at the Malt Shovel Tavern was reported at the time as a little "domestic" problem with the band. It turns out that this little "domestic" was nothing less than a motorcycle accident involving Honeyboy himself.

"You didn't know?" he exclaimed incredulously when I professed my surprise. "It was all over the newspaper! Heavy Drinker Crashes Moror Cycle!" he concocted, laughing at the notion.

"I don't normally read the Dipso Times" I quipped, sensing his wind-up.

it turns out that the accident was far from being funny at the time. Honeyboy sustained a number of cracked ribs, a punctured lung, and a badly shattered scapular!

"My shoulder still hurts a bit" he added.

But haven't we seen all this this before? Like with Bob Henrit? (see my review on the John Verity Band back in May 2011).

It seems that these old rockers never say die. And long may they continue!

* when you reach a maturing age, such things are noteworthy