Mick Ridgeway and Mojo Hand at the Malt Shovel Tavern

Mick Ridgeway was standing by himself just inside the back door of the Malt Shovel tavern, his back to a small group of late revellers vivaciously chatting with each other. The pub had almost emptied of customers and the other band members were busy packing their gear for the road home. Mick was standing with his back hunched, preoccupied with something that he was holding in his hands. 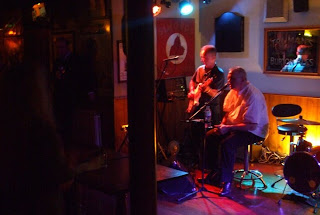 As I approached I could see he was trying to engage the zipper of his jacket. He must have been standing there for two or three minutes, but hadn’t managed to insert the zipper pin into the slider. Although it was obviously a challenging operation for him, he didn’t want to admit defeat, and declined my offer to help.
It seems strange that such a simple task could turn out to be such a difficult operation. But when you’ve been suffering from Parkinson’s disease for several years, even the simplest of tasks becomes a challenge. I was humbled by Mick’s dignity in the face of such grave circumstances.

All the more remarkable, then, when you consider that Mick had just performed a two hours gig at the Malt Shovel tavern with his band, Mojo Hand. And what a rollicking good gig it was.

If your bag is blues in retro livery, then this is the band for you. Mick Ridgeway and Mojo Hand deliver early Chicago blues in its authentic 50’s style.

Not so easily achieved as it might seem, the band stay true to the 50’s sound by keeping things simple. Taking a more direct approach to the music, they don’t just play blues, they actually adjust their modus operandi to emulate the sound and style of the original music, with each musician investing time and effort in achieving a remarkable quality of sonic authenticity from his individual instrument.

Underpinning the band’s 50’s sound was the guitar work of Al Sansome. Notable for a complete absence of the usual array of floor pedals, Al used an unadulterated Fender Stratocaster to achieve a solid and punchy sound. His playing style was deliberately straightforward, but nonetheless articulate and carefully thought through; and meticulously executed. Nice punchy base lines interspersed with crisp alternating chord work, accompanied by early RnB-style solos that had more than the occasional nod towards 50‘s icons such as Chuck Berry, T-Bone Walker and the like. Thoroughly enjoyable!

I was most impressed by the sonic quality of Adrian Wood’s stripped down drum kit, which consisted of snare, crash and ride cymbals, high hat and bass drum. And the smallest bass drum I have ever seen.

“It’s actually a floor tom” he told me later. “You can buy special kit to convert it to a bass drum configuration”.

The lightly dampened snare had a solid resonance with a slight ring; not too dry and not too trashy. The cymbals had a warm and bright timbre, with excellent sustain. The “bass” drum was more than adequate, despite the size. I could easily have been sitting in front of a high-end stereo system.

Charlie Lewin on bass guitar, bedecked in brown trilby, kept watch at the bottom end. He had a tendency to play mid-neck positions, and I would have liked to hear some deeper notes. But he more than made up for this slight shortcoming by an enthusiastic rocking performance.

One could see that Mick was constrained by some illness. Seated on a stool, every movement was slow and laborious. Yet his voice was full of feeling and character, and despite his limited breath intake capacity, his harmonica playing added colour and variation to the mix.

It was nice to see a microphone in front of the other member’s of the band too. This was required because of a good amount of call-and-response type tunes in the set, so typical of the 50’s American R’n’R scene. But vocal duties were also shared between Mick, Al and Charlie; each taking turns with songs such as “Route 66”, “My Babe” etc.

Mick’s rendition of the Willie Dixon/Eddie Boyd song “Third Degree” was perhaps the most poignant. Sounding like Dr John, his croaky voice soaked with the character of a veteran bluesman, the line “Bad luck, bad luck is killing me” echoed a sentiment a little too close to Mick’s heart.

“I just keep going” he told me with a wry smile after the gig. “I have a few years yet.”

For what it's worth, I sincerely wish him well.

Listen to Baby, What You Want Me To Do recorded live at the gig (links to external web site)