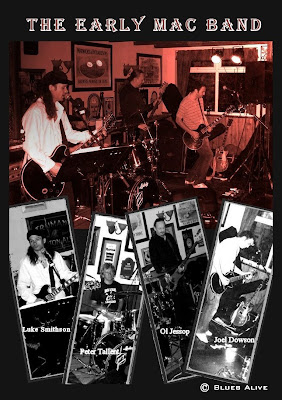 Tonight the Malt Shovel Tavern was a stopover gig for the Leeds-based Early Mac Band (formerly the Green Mac Band) en route to a short tour of the Netherlands.

The name change was the result of a complete new band line-up. With the exception of Peter Tallent on drums, the only surviving member from the Green Mac band, the introduction of new blood has transmuted the band into a heavier rock-blues outfit incorporated material from Gary Moore’s back catalogue (spearheaded by Joel Dowson on guitar) as well as many of Fleetwood Mac’s standards from their Peter Green days.

There was little to commend about this band’s performance, and despite their name, even less in respect of any notable deference to the great Peter Green, the inspiration for so many guitar players over the decades.

Joel Dowson played with youthful enthusiasm fired with adrenalin from his overdriven Peavey amp and Les Paul guitar, but his playing was pretty straightforward and offered little beyond that tired old pentatonic seen a thousand times in pubs and clubs up and down the country.

When I was an aspiring musician in my teens, my friend and mentor pointed out to me a playing defect prevalent in many rookie guitar players – the tendency to strike the open strings between chord changes. This usually happens when the chord change is neither executed with speed nor precision (a fault easily corrected with attentive practise). The practise is more prevalent today than ever, particularly amongst self-styled singer-songwriters, and in my view is a measure of a player’s laziness and incompetence.

Gary Moore is one world-renowned guitarist who has actually made this particular defect a feature of his guitar playing! Not in his chord changes, but in his solo work; and not through incompetence, but more as an expression of fired emotion. Nevertheless, it has always been a source of annoyance to me, and I have never been a huge fan. Much to my amusement, Joel not only incorporated Moore’s material, but he emulated Moore’s “string-crashing” style of playing as well. D’oh!

To be fair, some of the audience were roused to cheering and clapping, proving that there are plenty of guitar nerds out there receptive to his playing style.

Bass duties were carried out by Ol Jessop, and his playing was no more than that – dutiful.

I commented on Peter Tallent’s playing in a previous review, and tonight’s display of drumability was similar, so I’m not going to repeat myself here.

Sound levels were again a problem, depending on where you were seated. One individual in the front row was amusingly reading a book throughout the first set.

“It’s like being on X-Factor” Peter Tallent commented between numbers, a reference to Simon Cowell, who apparently was seen reading a book during some unfortunate competitor’s performance on the TV show “X-Factor”.

“I was just trying to buffer the sound” the individual protested to me later. “I found that by holding up my book, the sound was reduced slightly!”

Thankfully, the decibel levels were turned down during the second set, no doubt as a result of a number of complaints to the band members during the interval.

My evening’s entertainment wasn’t so bad though, thanks to a very tasty Cornish tipple on offer from the list of guest ales. Porthleven is a special edition pale zingy strong ale from Skinner's in Cornwall, and at abv 4.8% it’s a little stronger than my usual choice. But highly recommended when the alternative is an early night, as with a couple of friends who had had enough by the interval.

“Wan*ers!” was their unabridged and unceremonious précis of the evening’s musical offering. Perhaps this band would be better peddling their wares at the King Billy rock venue further along the street.