“Entertaining” was a phrase a friend of mine used to describe the Elephant Shelf gig at the Malt Shovel Tavern on May 11th. I thought he was being rather generous as I couldn’t find anything in the early stages of the set to elicit any commendation. But as the gig progressed I came to the opinion that it was a pretty fair summation, giving the bands somewhat theatrical persona and eclectic mix of material

Not having heard the band before, I had no idea what to expect. By the time I arrived at the venue, the pub was packed, and the band had already started their first set. As I waded through groups of people towards the bar, I was pleasantly surprised at the driving boogie-woogie sounds emanating from the back of the pub.

“Sounds good” I remarked to no one in particular. Someone nearby retorted something about a “gender bender”. A little bemused, I took a spare seat at one of the front row tables. Then I noticed something odd. Was that long-haired denim-clad lead guitarist/vocalist wearing makeup?

“He’s wearing makeup?” I called across to a friend, as if to confirm what I was seeing.

“Yes” he shouted in order to be heard over the frantic strains of the rock’n’roll number “In Trouble Again”. “And he’s wearing a woman’s top, women’s shoes, and women’s TIGHTS!”

I acknowledged my friend’s eagle-eyed observations with a thumbs up sign. Well, I could see that the singer was wearing a denim jacket and trousers, but he did look weird! He was obviously not youthful enough to be able to carry off the effeminate look like a young Bowie or Bolan. This was an altogether more serious statement of male femininity (if this be a valid expression?) and evoked the question “Could this band be really taken seriously as a blues outfit?”

The early numbers certainly sounded a little disjointed and unrehearsed, and it was difficult to find any noteworthy musicianship to spark the interest.

The drummer did capture my attention, however, but not for the obvious reason. His playing style was very unusual. He seemed to hold the sticks much too near the tip end, which gave very little recoil when struck. This was very apparent when he hit the hi-hat, which he did almost haphazardly using a kind of circular stroking motion, as one might turn the pedal of a bicycle.

His drum rolls were also amusing to watch. He seemed to approach each roll with a kind of hopeful trepidation, and once executed, seemed visibly relieved. And he had a somewhat unusual and amusing habit of verbalising his drumming as he played, as if this was acting as a guide to his playing.

But I dare say this would be rather irritating for any keen drummer in the audience hoping to acquire some new knowledge or drumming tips. I know of at least one such person who was so dismayed that he had already left even before I arrived.

The keyboard player put in a rather lame performance, but everybody comes to watch the guitarist. So who cares? And whilst there was little flair or technical skill in Vicky Martin’s guitar work, he displayed a passable level of musicianship.

As a result, what otherwise might have been a rather feeble and unconvincing show was rescued by the unusual and quirky line up, the extremely friendly vibe, the enthusiast singing and dancing of the Rosie on second vocals, and the guitar player’s unassuming and laid back approach to the music.

If I was to suggest that this was a kind of blues/boogie/rock’n’roll cabaret act, then you might appreciate my friends compendious summary. Entertaining? Well, yes!.


Nico' ZZ Blues (formerly known as NZZ Blues) are a blues outfit from the Champagne-Ardenne region of France fronted by singer/guitarist Nicolas Zdankiewicz. They generally tour the UK once or twice a year and are a regular feature on the Malt Shovel Tavern gig list.

I saw the band perform at The Malt Shovel a couple of times before, but this latest visit compounded my respect for the band. There was a marked improvement in Nicolas' guitar work, and he has not only matured into a fine blues player, but also a songwriter and arranger of considerable talent. Supported by the intricate fretwork of name? on bass, and the young and exceptionally talented Francois Cossin on drums, the trio bashed out an interesting mix of self-penned songs and blues standards.

They delivered a very palatable rendition of B.B.King's "The Thrill Has Gone", and a convincing interpretation of the ever popular Hendrix's "Voodoo Chile" and "Foxy Lady".

But it was their own original compositions that gripped me the most. Nico employed some interesting 3-note and 4-note chord voicings, and combining these with some simple but cleverly crafted signature licks, added interest and variation to their own material.

The levels were ideal, and Nico's Stratocaster produced a classic blues sound via the Fender Deluxe valve amp without requiring too much volume.
No comments:

Musical preferences are very personal, and whilst most people enjoy a particular musical performance once or twice, not everyone wants to see the same show over and over again. So if you end up in an eternal afterlife with a bunch of musicians, you'd better pray that they play the kind of music you really like. After all, I'm sure Matt Monro fans will be hoping that all trash metal musicians end up in hell. 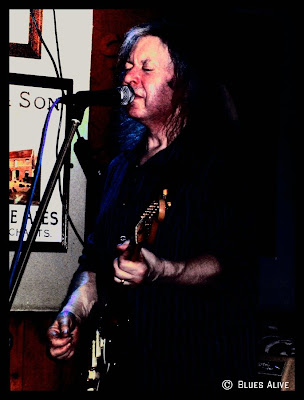 This thought struck me during the John Verity Band's bank holiday Monday afternoon gig at the Malt Shovel Tavern. I visualized a huge UFO descending over the small Northampton real ale pub and magically transporting the pub and its occupants up into the hovering craft before whisking us all away to a distant planet called Ogg. Stuck on Ogg with a pub full of friendly people, first class real ale and the John Verity Band would not be half bad!

Back here on earth, the John Verity Band was the concluding act in a weekend of music concerts at the Malt Shovel Tavern, part of the pub's royal wedding celebratory beer festival. John's vocals and guitar playing were in excellent form, and despite turning 60 a couple of years ago, his vocals still retain all the power and range of a 30-year old. The set list was almost identical to the one he performed at the pub a couple of months earlier, but the performance lost none of its sparkle and drive, and the band pulled out all the stops for the friendly and enthusiastic crowd.

The set list comprised mostly of covers, including a couple of Hendrix songs, plus some of John's own work, and the inevitable Argent classic, Hold Your Head Up. My particular favourites were the soulful Prove Your Love, written by John and sang with emotion and sincerity that only a personal investment in the lyrics can inspire, and Willie Dixon's Hoochie Coochie Man, a well worn blues standard that has found a new lease of life in John's cleverly rearranged score.

John was backed by his old friend and Argent band mate Bob Henrit on drums, and the indelible Northampton musical legend Mark Griffiths on bass.

Don't be fooled by the advancing years of these musicians. They can still rock it with the best of them. And if you think I'm kidding, consider for a moment the fact that Hendrit played the whole gig under some considerable physical discomfort, having been involved in a motorcycle crash the previous week. He sustained six cracked ribs to his back, and two to his chest! Yet he dragged himself all the way up from London to play the Malt Shovel gig. Now that's what I call rock 'n' roll.