The Nimmo Brothers at The Raven Hotel, Corby
10 October 2015 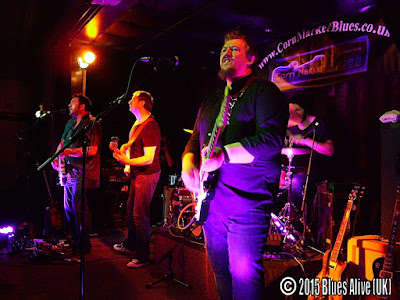 “We built this city... on rock and roll”

That was the refrain emanating from the radio during breakfast.

“What city?” my wife ventured, out of the blue.

It was a rhetorical question, but thinking about it, there is a limited number of possibilities. Nashville? Memphis? Maybe New Orleans?

The former industrial town of Corby in Northamptonshire was most definitely NOT built on rock 'n' roll. Corby was built on steel, by a predominantly Scottish (and especially Glaswegian) workforce. The town suffered when the great British Steel works closed shop in the early 80s, leaving Corby an industrial wilderness; with high unemployment, and all the attendant social problems that ensued. I hadn't been to Corby for years. No reason to go there, really; either for work or pleasure. But tonight I was making an exception.


And the reason? Two blues music adventurers named Dave Morse and Richard Boyles got together and formed Corn Market Blues, a non-profit organisation dedicated to bringing the cream of British blues to Northamptonshire, and tonight's billing at Corby boasted the nationally acclaimed blues brothers from Glasgow, The Nimmo Brothers. 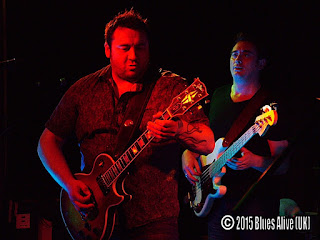 The Nimmo Brothers have been wooing audiences up and down the country and beyond for years with their special brand of honest, hard-working, and down-to-earth rock blues. After 20 years on the road together, and each with their own solo projects demanding more attention and time, Alan and Stevie Nimmo have decided to give The Nimmo Brothers a rest. This would be my one chance to catch them performing live together. I wasn't about to miss their show.

The gig advertisement boasted “... disappointment is most definitely not an option!” It seemed like a no-brainer, really. My only concern was that the venue might be … er... less than comfortable for an old geezer like me, as it was a standing-only event. That turned out not to be true.

The Raven Hall, attached to the Raven Hotel, turned out to be an exceptionally suitable venue for this type of event. Car parking was ample, especially considering the large number of people arriving from outside Corby. The entrance foyer was accessible, comfortable and well lit. Once past the ticketing desk, you entered the bar area, which was comfortable and well serviced with the usual range of lagers, beers and a couple of cask ales. Beyond the bar was the larger performance space, with seating and tables around the perimeter, a dance floor in the middle, and a stage at the far end.

More importantly, the event was well attended. It was nice to see a generous smattering of youngsters as well as the usual gamut of maturing blues faithful in the audience. You could feel the excitement and anticipation. Part of the enthusiasm was no doubt due to the fact that finally, local music fans had a venue that could attract the kind of blues artists hitherto only available at venues like the Musician in Leicester, or the Stables in Milton Keynes.The atmosphere was electric. 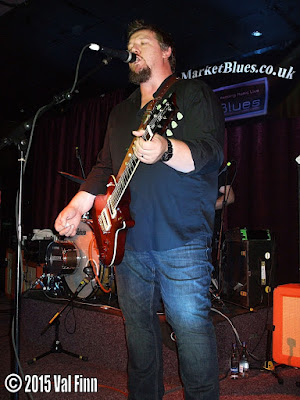 With seven albums and an extensive back catalogue of material to choose from, the band opened with “Bad Luck” from their 2009 album “Picking Up The Pieces” With brother Stevie taking the vocal, the band hit the ground running, displaying a professionalism, musicianship and readiness to deliver that can only be acquired from years of hard touring.

I was struck by how relaxed and unfazed they both were, with a complete absence of any of the narcissistic mannerism often associated with celebrity (Alan had recently won two awards at the British Blues Awards 2015 - Male Vocalist and Guitarist).

“It's like playing back home” Stevie exclaimed between numbers, an obvious acknowledgment to his fellow Scots in the audience (Corby's large Scottish population had earned the town the title of “Little Scotland”). Perhaps he was also conceding that famous Scots' prescript that “we're all Jock Tamson's bairns”

The opener was followed by the rocking “Shape I'm In” from their 2012 album “Brother To Brother”, with guitar solos shared between the two front men. Disappointment was now most definitely not an option!

Digging back to their first album together, the band slowed things down with a bluesy rendition of “Long Way From Everywhere” (“Coming Your Way” - 2001) before Alan blasted into the soulful “Slow Down” (from “Picking Up The Pieces”).

By now the party was in full swing, with the band obviously enjoying the proceedings as much as the audience.
Stylistically, Stevie and Alan had a lot in common. Although both voices have a distinctly different resonance, vocals were equally powerful and soulful; and their guitar playing was obviously honed on the same stone. Neither had the upper hand, and their camaraderie was infectious.

Standing stage right and stage left, the brothers had an almost telepathic understanding. Both knew each other's parts, and could swap roles at any given time. It was akin to watching two hands on the same body. One moment the hands were spread apart, the next joined together. 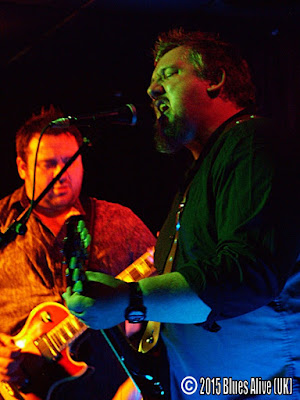 Both took turns soloing at stage centre. With enough savvy to know that around every street corner there's another young kid waiting to make every guitar player on the planet want to hang his or her guitar up, their solos were not a show of fretboard dexterity. Instead, these solos connected with audiences in a way that carried all and sundry along on a jaunt of sustained and searing highs and rocking rolling twists and turns. The brothers were simply orchestrating these emotional joy rides. And the audience loved it.

With drummer Wayne Procter (Blues Awards 2015 “Drummer of the Year”) providing the driving heartbeat, and bassist Matt Beable providing the underlying aural chassis, the unit was a formidable blues/rock roller-coaster.

Other songs from their back catalogue included “Still Here Strumming”, “All I Want”, “Nothing In Chicago For Free”, “Reason To Believe” and “Waiting For The Heart To Fall”
The band finished with an extended “Black Cat Bone” during which the brothers traded guitar licks and performed their pièce de résistance; each playing both guitars simultaneously in a kind of double guitar embrace.

The Nimmo Brothers will be put in mothballs for at least two years while the brothers pursue their separate musical projects. But with such a unique chemistry between them, there is sure to be a big demand for their return before too long.

In the meantime, Corn Market Blues will continue to put Corby on the rock/blues map by serving up more delicacies for the local concert goer. With a programme to whet the appetite of even the most discerning music fan, there's no excuse. Disappointment is not an option. Corby, here I come!