Thus wrote Nick Hyde, guitarist and vocalist with the David Raphael Band, prior to his band's outing at the Malt Shovel Tavern. The David Raphael Band is a blues outfit based primarily in the Portsmouth area, although David himself is a relative hop-skip-and-jump away just off the M25. The rest of the band must really like gigging though, if they are prepared to undertake the 250 mile, 5 hour round trip from the south coast.

Now there are some very positive points about this band, but sound engineering is definitely not one of them. So the bad bits first.

A musician friend of mine once remarked that he enjoys live blues music "provided there isn't wall-to-wall harmonica." I have to yield to his superior knowledge of the subject, as he's had first hand experience of playing with some of the greatest luminaries of the blues harmonica such as Sonny Boy Williamson and Howlin' Wolf!

"But they could play" he asserted, referring to the fact that most current blues harmonica players are not particularly good at their craft.

After all, as long as you select an instrument with the appropriate key, blues harp is relatively easy to play. At worst, all you have to do is alternately suck in and blow out (like Mr. Dylan does) in order to make a plausible blues sound. It becomes a lot more difficult however to acquire a mastery of the instrument, and good harp players are few and far between. So I can understand my friends disparaging remark.

If you accept then that your average blues harp player is not going to have the deftness of a Paul Butterfield, the finesse of a Sonny Boy Williamson, or the ingenuity of a Little Walter, the least you can expect is a decent blues harp sound with a punchy mid-range and plenty of body tone. So I definitely wouldn't recommend a vocal mic run through the PA system. Instead, use a good bullet-type harmonica mic and run it through a good tube amp. This is nothing new - Little Walter was doing it in the 50s (see my review last week on Honeyboy Hickling).

Unfortunately, David Raphael had few of the attributes of those former maestros of the blues harmonica; nor did he have any of the aforementioned equipment necessary for a decent blues harp sound. To compound the issue, the PA mic he was using for the harmonica had too much treble and the volume slider was turned way too high. Frankly, his harmonica sounded shrieky and dissonant.

With the PA's EQ excessively set to treble, the vocals also suffered in terms of tonal quality, sounding more like someone calling from inside a metal drum. Thankfully, these mics were not so loud as to be uncomfortable. 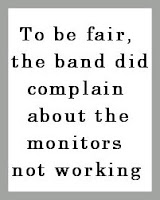 The PA was not the only sound source that was overly trebly. Nick's guitar was too bright and too loud; especially during the solos, when he had the habit of switching to an even brighter sound using the 3-way pickup switch on his Les Paul.

To conclude with this appraisal of the band's sonic oxyphony, the drummer's snare was a big fat old affair that had a hard dry attacking sound with little or no sustain. When hit hard, it sounded loud and dull, with severe ringing in the upper harmonics.


To be fair, the band did complain about the monitors not working, but in a small venue like the Malt Shovel, it can't be too difficult to get a reasonably balanced sound without the need for monitors.

"Should have brought along some ear plugs" a friend remarked.

It wasn't such a bad idea. At least one regular patron I know invariably uses disposable foam earplugs for his own comfort at gigs. But he never carries a spare set. So I was stuck.

Not everyone was displeased with the sound, though. One drummer friend of mine disagreed wholeheartedly with my appraisal of the snare sound, and told me he was thinking of buying one for his own band! Just goes to show?

Play-ability on the lead instruments was mediocre, although the rhythm section put in a palpable performance.

David attacked the blues harp with enthusiastic animation, but there was little else of note in his performance on that instrument.

Nick’s guitar solo work was similarly un-noteworthy, but his chord work was better, making good use of the 9th chord to give Dave’s harmonica and keyboard playing a mellow bluesy feel.

Faring much better on the bass, Steve played some excellent striding bass runs, and his tone and dynamics were superlative. He had the unusual and amusing habit of intermittently lubricating his picking thumb with a quick brush against his tongue during his performances, as one might do when thumbing through reams of paperwork. 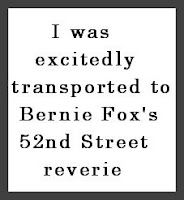 Bernie put in a solid performance on drums, but as I’ve already stated, I was not enamoured by his overbearing snare drum sound. He seemed to enjoy himself though, and maintained a “cool vibe” throughout his performance, chewing on gum and staring into some unknown mise en scene, as if he was playing the hottest jazz club on 52nd Street in 1950’s Manhattan (I wish!).

Vocals were shared between David and Nick, but it is Nick’s voice rather than David’s that demands further expatiation. And for very good reason!

His voice was exceptional! If you are familiar with black R’n’B act from the 1950’s, you may get a flavour of Nick’s particular sound. Otis Williams, Larry Williams, The Flyers, The Coasters, Clyde McPhatter – take your pick. Such greats from that pre-eminent era of early Rock’n’Roll music are all easily conjured up in Nick’s voice, as is the most notable exponent of this musical style today - JD McPherson, a singer-songwriter from rural southeastern Oklahoma (who incidentally played Celtic Connections in Glasgow earlier this year). I was excitedly transported to Bernie Fox’s 52nd Street reverie whilst listening to Nick's mellisonant tones.


"We'd love to play here every week" Nick announced as the band approached the end of the second and final set, cock-a-hoop at the applause from an appreciative crowd.

Nick was merely echoing the sentiments of many of the performers who "tread the boards" at this popular Northampton blues venue. There are very few gigging musicians who will fail to notice the support and enthusiasm for live blues music shown week-in week-out by the patrons of this little real ale pub.

But I for one was not thrilled with the idea of Nick and his pals playing there every Wednesday night, or even playing once a month. It would have to be an exceptionally good band for me to want to see them on a regular basis, and even the great John Verity can loose a little shine on me after a dozen or so performances (see my review of The John Verity Band).

Well, they do say that variety is the spice of life? So once or twice a year would be more than ample, thank you very much.