Mick Pini at the Malt Shovel Tavern, Northampton
15 May 2013

Oh, the joy of it! At last, an euphonical soundscape to indulge my auditory sensibility! Or putting it in plain english, a damn good sound mix! 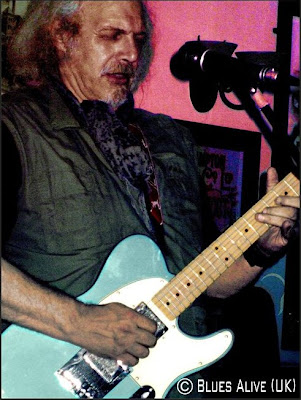 Fresh off a Ryan Air flight from his home in Germany, blues guitarist Mick Pini teamed up with his old pals Jools Grudgings on keys, Micky Barker on drums, Paul Pryor on bass (in place of his usual band mate John ‘Bugsy’ Maloney) for a flying tour of the UK.

OK, take a bunch of quintessential British blues musicians, equip them with some top quality gear such as a punchy overdriven guitar, a couple of keyboards piped through a genuine Leslie speaker cabinet, a warm punchy kit of drums and a bass guitar and rig full of colour and texture. Now pack them into a small venue full of eager blues fans, set the levels to around 80dB SPL, pour a few champion real ales, and voila! You have a cracking good evening of rollicking blues music.

Now I know that not everyone will agree with me. Some people are not overly enamoured with Mick’s elongated guitar solos, or his intermittent ramblings about his life. But I am talking primarily about the sound quality here, and you would be hard pressed to find a better blues sound mix anywhere in the country. Of course, top class musicianship follows closely behind.

Musically speaking, Mick Pini is a bit of an enigma. A blues guitarist who has been around for more years than he cares to admit, he is passionate about the blues. Always ready to give a helping hand to any young musician aspiring to his beloved musical genre, he is a willing mentor, inviting young hopefuls to come and sit in on his set. Krissy Matthews was one such youngster helped in this way by Mick.

As it happened, Mick got chatting to a couple of very young aspiring blues musicians during the interval. Inevitably, he invited them stage front during the second set,  parading them in front of the packed room and  proclaiming them as future torch bearers of the blues.

"They just need a bass player to form a band" he concluded.

On the other hand, Mick bemoans his own misfortune at never having made it big on the blues circuit. It appears that in these latter stages of his musical career, there is little sentiment from the British audience for an old blues warrior who is trying hard to keep his ship afloat.

A thrill to listen to

But tonight Mick had a spring in his step, and looked like he was enjoying being back in the UK again with his old blues buddies. He was upbeat about the new music he had been recently recording, and he enthused about his imminent new website.

“My current website was designed by a radio engineer” he announced during one of his little impromptu speeches. “I mean, the web site is crap, but my old radio works a treat!”

Mick’s guitar style might be considered uncomplicated and less challenging to master than most, but its beauty is in its simplicity, with assiduous attention to detail on those finer melodic interrelationships between the minor and major scales, much like early Peter Green or Mike Bloomfield. A thrill to listen to, it’s surprising then that not many guitarists aspire to this style of playing today.

Using a special hand-built Telecaster-styled guitar in pale blue livery plugged into a saturated valve Mesa Boogie amp, his guitar sound epitomised those early British blues players, with all the colour, resonance, grittiness and overdrive so typical of London clubs at the vanguard of the British blues boom during the 60s. His rendition of “Steppin’ Out” sounded uncannily similar to Clapton’s version of the instrumental recorded on the famous Bluesbreakers’ “Beano” album released in 1966.

Mick’s playing however lacks consistency, and at times he is prone to getting it all wrong. Part of the problem is that he relies a lot on sight checking his fretboard. With a combination of Mick’s degenerating eyesight (I assume) and an inadequate level of stage lighting at the Malt Shovel, he occasionally and unexpected misplaced his finger positioning when moving up and down the neck. Oops! As a result, his playing ranged from the sublime to the farcical.

Some of his other onstage antics were similarly unpredictable. For example, having completed the first song in their set, Mick decided that he wanted to plug in his wah-wah pedal. Unperturbed by the waiting assembly, he casually chatted with the band members while he untangled the leads and proceeded to wire them up.

Unplugging the leads, he tried again.

Disposing of the pedal, he nonchalantly announced to the bemused audience that the next song would be “…without a wah-wah pedal”.

A couple of my friends though that this interruption was simply downright unprofessional!

Mick is also prone to breaking into extended and unannounced soliloquies during the course of the evening.

“They were going through the safety procedures on the Ryan Air flight this morning” he suddenly began during a rendition of Peter Green’s “Watch Out”, while the rest of the band continued playing quietly in the background.

“Here was me thinking about blues riffs, and they’re telling me how to attach my life jacket” he continued. “LIFE JACKET? What chance do we have with a life jacket if the plane goes down?”

And on it went, for five to ten minutes.

Not to everyone’s taste, but for me it was quite entertaining, all part of the mad mad world of Mick Pini.


Hardly renowned for his vocal ability, Mick was in better voice than I’d heard for years, and to the same degree as his guitar work, he applied himself with energy and qusto to his lyrics.

It goes without saying that the rest of the band were top drawer. 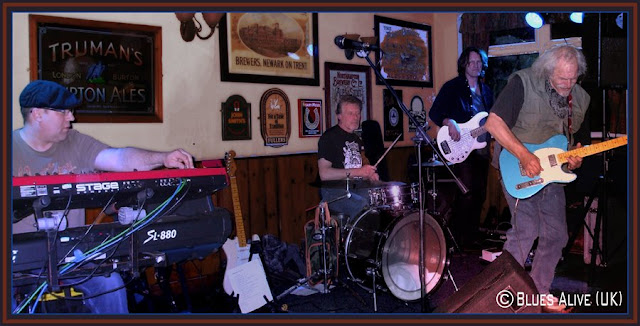 Micky Barker first appeared as a replacement drummer for Joachim Greve a few years back, after Joachim abandoned Mick and others by flying off to America in search of better times. Since then, Micky has been Mick’s drummer of choice.

Noted for his minimalist drum kit (a snare, a bass drum, a high-hat, two cymbals, no toms), Micky relies on his abilities rather than his instrument to drum up more sounds from his limited kit than most drummers dare to dream about, despite the latter more often than not using an endless arrays of toms, bells, cymbals and other paraphernalia to support their performances. He has the ability to modulate the dynamics and timbre of these few drums and cymbals by playing them at diverse points on their surfaces with varying degrees of force. These variations happen at lightening speed, and are fascinating to watch.

“I’ve come out of retirement for this gig” Micky protested with more than a hint of irony during the interval, drawing on a self-rolled cigarette.

More likely a forced retirement than a voluntary one, I assumed. It seems that gigs are becoming harder to find for seasoned musicians who dare to expect some remuneration for their labours. So keeping transport costs to a minimum is paramount, and Mick’s kit fits snugly into the boot of his saloon car.

Jools Grudgings needs no introduction to the Malt Shovellers, showing up here more often than most in a number of different bands. Like any musician, Jools can have his good nights and bad. And tonight he was in particularly good fettle, firing on all cylinders.

Of course, the band and style of music suited him down to the ground, as Mick’s 60’s-style guitar screams out for a cool B3-style keyboard sound to complement his playing. Jools was more than happy to oblige, and I wasn’t the only one enthralled as Jools exchanged solo duties with Mick throughout the evening.

Now Paul Pryor IS new to me, and as the band struck up, I couldn’t recall ever seeing him play here before. But boy! Was I in for a treat!

Many years ago I saw the late John Slaughter perform with his blues band at The Stables venue in Buckinghamshire. This was in the old stable block conversion, well before the Dankworth’s built their new state-of-the-art theatre. That night remains etched in my memory for one reason in particular, the bass guitar sound. I continued to eulogise about it for years afterwards; the transparency in the lower registers, the colour, the tone, the texture. Add to that the absolute cool groove of the bass player(1), eyes closed, into the music, rolling along in the underbelly of the Slaughter blues train. Mesmerising!

It defined to me exactly what a bass guitar sound was all about, at least in a blues context, and it set a standard that has very rarely been equalled since that magical evening all those years ago….until now!

I suppose you’re thinking “what’s the big deal?” A bass is a bass, right? But you might not hold the same argument when comparing fine wines, for example, although you may not know the difference between a classic wine and a bog standard one. And you’re right, most people won’t know the difference between one bass sound and the next. But I love a good bass sound, and you can't imagine how gratified I was to hear Pryor's galvanic tone.

One of the abiding features of a good bass sound is that it doesn’t fight with other instruments across the lower sonic frequencies. A bassist playing with the bass drum rather than the snare often creates a conflict, with the bass drum usually winning out. Result? The bass guitar ends up sounding woolly and muffled.

Well, I suppose Mick Pini is a bit hit and miss. But you know, he’s good fun, he doesn’t take himself too serious, and his heart is in the right place. He could have given up a long time ago, but here he was, still plugging away, playing the blues with all the sprightliness and passion of a young firebrand. For that he deserves a lot of respect.

After all, he is one of our own blues survivors. But sentimentality carries little resonance with British blues fans. If he had been born in the US, he’d probably be a bit of a celebrity by now, and might even be invited to the White House for dinner in recognition of his achievements in promoting roots and blues music. OK, maybe that's a little bit overoptimistic! But at least some guitar techie would be on hand to sort out his stage gear and make sure the wah-wah pedal was wired up and working properly before the gig!

1. It was just recently that I identified the bass player in question at the Stables gig all those years ago, when I recognised him playing a gig in the Malt Shovel. Jim Rodford, no less.

Some of the gear used by the band at the gig.